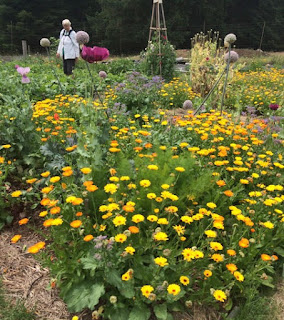 Calendula is such a cheerful plant with its beautiful hues of yellow and orange. All summer and well into the fall we have an abundance of calendula that self seeds each year in the Gabriola Commons kitchen garden.  An edible flower, it can be used to decorate salads, and is an inexpensive substitute for saffron. In addition to its many medicinal properties, beautiful fabric dyes can be made from the flowers.

Calendula makes an excellent skin cream that improves skin firmness and hydration. An antiseptic and anti-inflammatory herb, it is excellent for healing wounds by promoting cell repair and growth, speeding up the healing process. It is good for treating chapped skin, scrapes, burns, rashes, bruises, skin ulcers, skin infections, varicose veins, insect bites, fungal conditions such as athlete’s foot, and eczema.  For babies it is helps treat cradle cap, diaper rash and other skin irritations.  Calendula also has been shown to help prevent dermatitis or skin inflammation in people with breast cancer during radiation therapy. 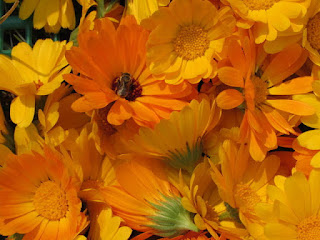 The botanical name, Calendula, is derived from Latin, calendae, meaning little calendar or clock and has long been associated with the sun, as the flowers open at sunrise and close at sunset. As October’s flower, it symbolizes endurance, which makes sense since it blooms from April until the first frost.

A sun herb, it strengthens the heart and thus the spirits. It warms our hearts toward others, so that we can be compassionate to others. Some say calendula builds psychic powers and induces prophetic dreams.

at September 04, 2018 No comments:
Email ThisBlogThis!Share to TwitterShare to FacebookShare to Pinterest

If you visit the little field, you will see a big clump of sunchokes.  More commonly known as Jerusalem artichokes, they are not related to artichokes, and are native to the northeastern U.S. They are actually tubers of a perennial sunflower that produces edible low-starch tubers that look like small potatoes and taste like water chestnuts.  They are very easy to grow, although the flowers are small and unassuming on top of these tall 5-10 feet high plants. Once established, they are fairly drought resistant.

The sunchoke is best planted in a dedicated bed as they spread rapidly and may be difficult to remove completely.  I learnt this the hard way, as I removed a bed of these growing by my garage and was careless with where I put the soil and tubers.  Soon we had huge clumps of them growing in mad abandon in several different places, which required a great deal of work to remove.

Sunchokes will keep in the fridge for 7-10 days.  They can be frozen or left in the ground, and can be harvested between September and March.

They are great for soup, and here is a recipe to try:

Sunchoke and Garlic Soup
Serves 8
1/4 cup olive oil
1 pound sunchokes, scrubbed and chopped
2 small waxy potatoes (such as Yukon Gold, red or new potatoes), scrubbed and chopped
1 medium yellow onion, chopped
3-5 cloves garlic, chopped
Pinch dried red chili flakes
6 cups vegetable stock
2 bay leaves
Salt & pepper
Fresh chopped baby kale for garnish
Heat the oil in a large soup pot over high. Add the sunchokes, potatoes, and onion. Sauté about 10 minutes, stirring occasionally. Add the garlic and optional chili flakes, and continue cooking until the vegetables are lightly browned. Add the stock and bay leaves. Bring the mixture to a boil then lower the heat to low. When soup settles into a simmer, cover and cook until the potatoes and sunchokes are tender, 20 to 30 minutes.
Remove the bay leaves and then process the soup either with an immersion blender, or in a blender in small batches, until smooth. Check for seasoning. Add salt and pepper, as desired.
Garnish and serve.

at January 25, 2018 No comments:
Email ThisBlogThis!Share to TwitterShare to FacebookShare to Pinterest

Flower for every month of the year

Last year I was told that there are flowers that bloom every month of the year on Gabriola.  Given the unusually cold and snowy winter we had, I had difficulty believing that claim.

In my garden, I have an amazing little pink rose that has been blooming since the summer.  This picture was taken on January 7th.

What is blooming in your garden?  If you send me a picture I would love to share it.

at January 16, 2018 No comments:
Email ThisBlogThis!Share to TwitterShare to FacebookShare to Pinterest

How the Little Field was named 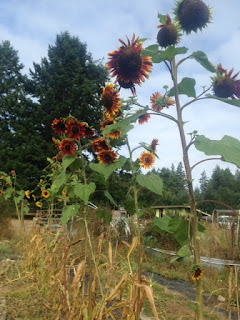 How big does a vegetable plot need to be to be called a field? With the average farm size in BC being about 350 acres, the field where we currently grow our vegetables clearly falls in the category of “little field”.  (In case you were wondering, there is no “big field” on the Commons.)

By way of comparison, the smallest regulation-size soccer fields are 50 yards by 100 yards, or 1.03 acres.

The Commons Farm, which has 26 acres, with only a few acres under cultivation, falls in the most common farm size in British Columbia (about 37% or 7,250 farms).  Some 27% of BC farms have fewer 10 acres,  with many of these smaller farms located in the lower mainland, southern and eastern parts of Vancouver Island, and parts of the Okanagan in the southern interior. Only about 18% of BC farms have more than 240 acres.

at September 27, 2017 No comments:
Email ThisBlogThis!Share to TwitterShare to FacebookShare to Pinterest

If you remember how to make popcorn on the stove, this is basically the same technique.  You could also try putting some in a paper bag and popping it in the microwave for about 12-15 seconds.

at September 23, 2017 No comments:
Email ThisBlogThis!Share to TwitterShare to FacebookShare to Pinterest

Have you started growing amaranth yet? If you visit the little field you will see this beautiful plant that can grow up to 8 feet high, making it both a lovely ornamental plant and excellent nutritional source of gluten-free food. Like quinoa, amaranth is not technically a grain but is the seed.  One plant can produce up to 60,000 seeds. 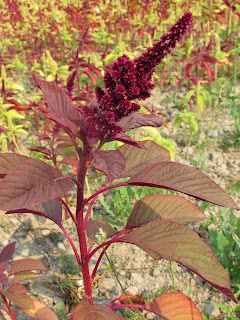 Amaranth was a key part of the diets of the pre-Columbian Aztecs, and it was used both for food and as part of their religious ceremonies. Sadly, when Cortez and the Spanish conquistadors arrived in the 16th century, amaranth crops were burned and its use forbidden.
Amaranth has a protein content of about 13%, which is much higher than most other grains.  It has twice as much protein as a cup of long-grain rice (26 grams of protein in one cup).  It also contains lysine, making it a complete protein containing all of the essential amino acids.
It is a source of key vitamins and minerals - calcium, magnesium, potassium, phosphorus, and iron.  One cup of uncooked amaranth has 31% of the recommended dietary allowance of calcium, 14 percent for vitamin C, and a whopping 82 percent for iron.
Amaranthus, collectively known as amaranth, is a cosmopolitan genus of annual or short-lived perennial plants. Some amaranth species are cultivated as leaf vegetables, cereals, and ornamental plants. Most of the Amaranthus species are summer annual weeds and are commonly referred to as pigweed.
This plant is hardy, preferring a high elevation, but can grow at almost any elevation in temperate climates if it has moist, loose soil with good drainage.  It can also survive in low-water conditions once the plants have been established. Considered a native plant of Peru, it is now grown around the world in countries including China, Russia, Thailand, Nigeria, Canada, the US, and Mexico, and has become a part of the cuisines of India, Nepal and the African continent.
More than 60 different species exist of this super food. The leaves of the amaranth plant are also edible. Commonly used in Asian and Caribbean cuisines, they can be stir-fried or chopped and added to soup. Amaranth porridge is a traditional breakfast in Peru, India, Mexico and Nepal. Popped amaranth is used in Mexico as a topping for toast that looks like tiny popcorn kernels and has a nutty taste.
It has been estimated that amaranth was first domesticated 6,000 to 8,000 years ago - and considering how easily and quickly it grows, that makes sense! 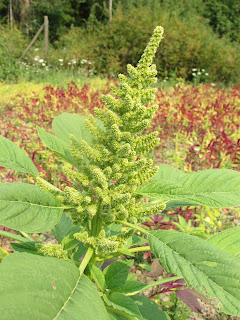 Amaranth is good for your heart - several studies have shown that amaranth could have cholesterol-lowering potential. For example, a 2003 study published in Guelph showed that amaranth has phytosterols, which have cholesterol-cutting properties.
Among its other impressive nutritional stats, amaranth is a good source of fibre, with 13 grams of dietary fibre per uncooked cup compared to 2 grams found in long-grain white rice.
In my next post I will explore some more of the history of this fascinating plant and how it was used by the indigenous peoples of the Americas.

at August 18, 2017 No comments:
Email ThisBlogThis!Share to TwitterShare to FacebookShare to Pinterest

You can never have too many zucchini recipes. This delicious recipe from Sharon Pattison can be made as a gluten-free dish and is tasty served hot or at room temperature.


Mix dry ingredients together and mix with onions and zucchini. Fold in grated cheese. Mix eggs and oil and blend into zucchini mixture.
Pour into a greased pie plate. Sprinkle with parmesan cheese and bake in a 350 degree oven for 35 - 45 minutes or until a knife inserted comes out clean.
Let cool for 10 – 15 minutes before serving.

at August 09, 2017 No comments:
Email ThisBlogThis!Share to TwitterShare to FacebookShare to Pinterest

Many people are familiar with the benefits of comfrey tea as a liquid fertilizer for your garden.  Last month you could see its purplish blooms in our kitchen garden.

Native to Europe and Asia, comfrey is considered a master healer plant that can be used from everything from drawing splinters to easing backache.

I have just discovered that comfrey is also good for travel - it was believed the comfrey leaves in the shoe would ensure safety while travelling, and the leaves placed in a suitcase would prevent its loss.
at August 07, 2017 No comments:
Email ThisBlogThis!Share to TwitterShare to FacebookShare to Pinterest

at August 05, 2017 No comments:
Email ThisBlogThis!Share to TwitterShare to FacebookShare to Pinterest

Can you guess what this is? 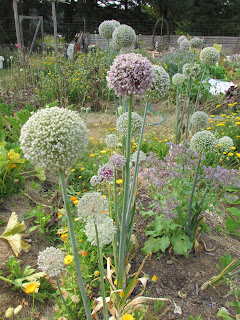 at August 04, 2017 2 comments:
Email ThisBlogThis!Share to TwitterShare to FacebookShare to Pinterest 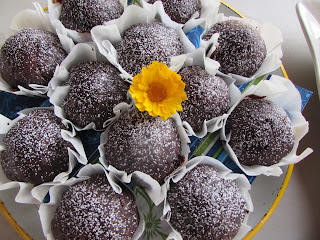 If you visited the mid-week market this week, you might have been lucky enough to try one of Sharon's delicious cupcakes, a wonderful way to use up the plentiful zucchini.  Recipe to follow!
at August 04, 2017 No comments:
Email ThisBlogThis!Share to TwitterShare to FacebookShare to Pinterest
Older Posts Home
Subscribe to: Posts (Atom)

Calendula is such a cheerful plant with its beautiful hues of yellow and orange. All summer and well into the fall we have an abundance...

Jennie
A passionate yogini since the age of thirteen, when I taught myself from a book, I have been practising yoga regularly for over thirty years, and teaching for some twenty years now. My original practice was from the Sivananda lineage, then I moved to a more vigorous Ashtanga practice, which has evolved today into a softer more mellow practice that includes restorative yoga.

View my complete profile
"The glory of gardening: hands in the dirt, head in the sun, heart with nature. To nurture a garden is to feed not just on the body, but the soul." - Alfred Austin

Fig Tree at the Cobb Structure 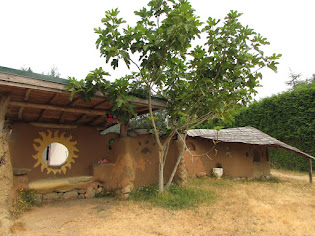 Tip - To view all the recipes on this blog, use "recipe" as your search criteria.
Contact us at farming@gabriolacommons.ca.